My next novel: The Middling Affliction

I’m thrilled to finally announce this bit of news I’ve been sitting on for a few months. Now the ink is dry and the Publishers Marketplace announcement is out, so…

I sold my second novel, The Middling Affliction, to Caezik SF & Fantasy, in a deal negotiated by Valentina Sainato and Joshua Bilmes of JABberwocky Literary Agency.

Caezik Press is an imprint of Arc Manor. They publish Heinlein, Rob Sawyer, Ben Bova, and Harry Turtledove among others. They also publish Galaxy’s Edge magazine where many of my short stories have appeared. I’m thrilled to be working with them!

The Middling Affliction is a humorous urban fantasy adventure I like to explain as “The Dresden Files meets American Gods in New York City.” Those who have read my short stories may already be familiar with Conrad Brent, a hero who can perceive magic but can’t cast spells on his own. He fancies himself a magical Batman as he battles arcane threats using various artifacts and relying on his wits, a healthy amount of bluffing, and loads of caffeine to do his job. Conrad is the Brooklyn representative of the Watch, an organization of magic users whose mission is to protect mundanes (regular people) from monsters and unscrupulous or evil magic users.

This is book 1 of The Conradverse Chronicles, but it is written to work as a standalone, so no commitment to a series is required; you get a complete story.

The Middling Affliction will be hitting bookshelves in April 2022. Watch this space for more announcements!
#SFWAPro

Comments Off on My next novel: The Middling Affliction |

A Shard Glows in Brooklyn at FarFetchedFables

I’ve been quiet again, but that’s because I’ve been super busy. There are cool things in the works and I will be popping up for air more often very soon to announce some of them. Meanwhile, the fine folks at FarFetchedFables have produced another wonderful recording of one of my stories. (They literally make me sound good!) This time it’s A Shard Glows in Brooklyn, a prequel to Requiem for a Druid which they had podcasted last year. There’s an interview with me after the story, too.

Comments Off on A Shard Glows in Brooklyn at FarFetchedFables |

My signature urban fantasy series combining gritty noir and corny humor are now available as e-books, with an amazing cover (art by Dixon Leavitt and layout by Emerson Matsuuchi). Check them out: 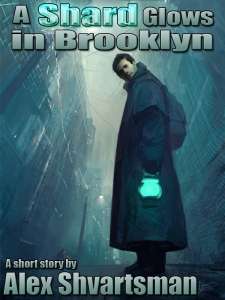 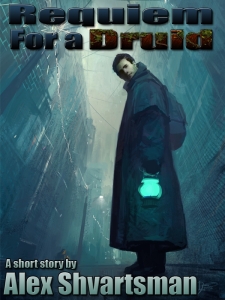 The books are currently live on Shashwords and will be going live on Amazon and B&N over the next day or two. I will post the other links once they’re live.

If you enjoy my writing, these stories are essential, because they form a prelude to my novel! I will be working on a much longer Conrad Brent story later this summer.

A Shard Glows in Brooklyn at Smashwords

Requiem for a Druid at Smashwords

Publication: “Requiem for a Druid” in Galaxy’s Edge

The inaugural issue (March 2013) of Galaxy’s Edge magazine edited by Mike Resnick is now live, and I’m honored to have a story included in the distinguished company of some amazing authors whose work is featured in this volume. My story in this issue is called Requiem for a Druid. It is the second Conrad Brent adventure, and although it stands fine on its own, I do recommend that you read A Shard Glows in Brooklyn first.

In Requiem for a Druid Conrad goes up against New York’s best-known real estate developer with a penchant for stamping his name on everything and a bad hairdo. You know. That guy.

In other news, I recently made appearances on two blogs.  Susan J Voss was kind enough to interview me on her blog, Deb of Darkness and  I wrote a mini-essay about the slush-reading process for Unidentified Funny Objects for Anne E Johnson’s blog. I appreciate the opportunity to talk up Unidentified Funny Objects an extra time. The e-book sales have been steady and I hope to move forward on the second volume sooner rather than later.

Finally, I’m going to be publishing several of my stories as eBooks on Amazon and other e-reader platforms. I have already lined up some absolutely amazing cover art which I can’t wait to share with everyone in the coming days.

Last but not least, check out an in-depth review of Unidentified Funny Objects by Mieneke van der Salm at the Fantastical Librarian blog.

“Requiem for a Druid” accepted at Galaxy’s Edge

Arc Manor is launching a new pro zine called “Galaxy’s Edge” in March of 2013, edited by Mike Resnick. I’m thrilled to announce that the premier issue will include “Requiem for a Druid.” My story will get to rub shoulders with works from Lou Berger, Robert J. Sawyer, Jack McDevitt, Kij Johnson, James Patrick Kelly, and Barry Malzberg!

“Requiem for a Druid” has quite a history. This is a second story in the urban fantasy series about Conrad Brent. I love writing Brent stories, which combine urban fantasy, noir, and humor with the Brooklyn setting which is so familiar to me.  And I title them with horrible puns of iconic books and movies set in Brooklyn, too. The first story in the series, A Shard Glows in Brooklyn, was published by Buzzy Magazine earlier this year.

“Requiem” was a story that got me into the Viable Paradise workshop. It was read and critiqued by brilliant writers and editors such as Patric Nielsen-Hayden, Sherwood Smith, Elizabeth Bear, Steven Brust, and Jim McDonald. Also, many of the students at the workshop.  I sent it there because it was my favorite story, and one of my strongest.

And now it’s been accepted by Mike Resnick, a writer and editor whom I admire greatly and have been a fan of for many years.

I plan to write one or two more Brent stories next year. I also hope to complete the first draft of a Brent novel in 2013. But for now, I leave you with the opening line of “Requiem”:

My job that morning was to banish a demon, but I was determined to finish my cup of coffee first.

Be sure to check out Galaxy’s Edge and read the rest of it in a few months!