Publication: “Requiem for a Druid” in Galaxy’s Edge 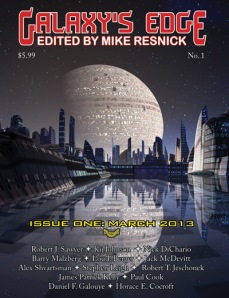 The inaugural issue (March 2013) of Galaxy’s Edge magazine edited by Mike Resnick is now live, and I’m honored to have a story included in the distinguished company of some amazing authors whose work is featured in this volume. My story in this issue is called Requiem for a Druid. It is the second Conrad Brent adventure, and although it stands fine on its own, I do recommend that you read A Shard Glows in Brooklyn first.

In Requiem for a Druid Conrad goes up against New York’s best-known real estate developer with a penchant for stamping his name on everything and a bad hairdo. You know. That guy.

In other news, I recently made appearances on two blogs.  Susan J Voss was kind enough to interview me on her blog, Deb of Darkness and  I wrote a mini-essay about the slush-reading process for Unidentified Funny Objects for Anne E Johnson’s blog. I appreciate the opportunity to talk up Unidentified Funny Objects an extra time. The e-book sales have been steady and I hope to move forward on the second volume sooner rather than later.

Finally, I’m going to be publishing several of my stories as eBooks on Amazon and other e-reader platforms. I have already lined up some absolutely amazing cover art which I can’t wait to share with everyone in the coming days.

Last but not least, check out an in-depth review of Unidentified Funny Objects by Mieneke van der Salm at the Fantastical Librarian blog.

This entry was posted on Thursday, February 28th, 2013 at 7:07 pm and is filed under Acceptances & Publications. You can follow any responses to this entry through the RSS 2.0 feed. Both comments and pings are currently closed.

2 Responses to Publication: “Requiem for a Druid” in Galaxy’s Edge