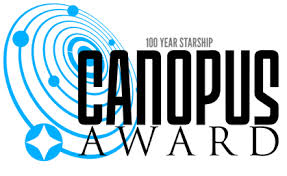 I’m thrilled and proud to announce that I’m one of the finalists for the inaugural Canopus Award for Excellence in Interstellar Writing!

This award is presented by 100 Year Starship, a project founded by Mae Jemison and jointly funded by NASA and DARPA. They’re looking to facilitate the creation of an interstellar starship within the next hundred years. How cool is that? 100YSS hosts an annual public symposium, and as part of the upcoming one in Silicon Valley they will announce the winners of this award in several categories.

The story of mine that is recognized by them is “The Race for Arcadia,” which is part of Mission: Tomorrow, a Baen anthology edited by Bryan Thomas-Schmidt, out this fall. It is a story of the rekindled space race, this time between the US, Russia, and India, as each nation strives to become the first to land a manned spacecraft on Arcadia, or as we know it now, Kepler 452b. (Incidentally, this will likely be the first professionally published story to mention this recently discovered Earth-lke exoplanet by name!) 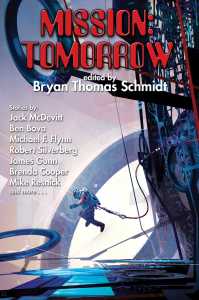 HOUSTON, September 23, 2015 — 100 Year Starshipâ (100YSSâ) today announced the finalists in the inaugural Canopus Award for Excellence in Interstellar Writing.  The Canopus Award is  an annual writing prize recognizing the finest fiction and non-fiction works that contribute to the excitement, knowledge, and understanding of interstellar space exploration and travel.

Winners will be announced and honored on Friday, October 30, 2015 during the 100 Year Starship 2015 Public Symposium held at the Santa Clara Marriott, in Santa Clara, California  October 29-November 1, 2015.

The finalists (listed in no particular order) in the four award categories are listed below.

In the category of “Previously Published Long-Form Fiction” (40,000 words or more):

·       Other Systems by Elizabeth Guizzetti

·       “Finding Earth 2.0 from the Focus of the Solar Gravitational Lens” by Louis Friedman and Slava Turyshev

This entry was posted on Wednesday, September 23rd, 2015 at 1:31 pm and is filed under Acceptances & Publications, Event Appearances. You can follow any responses to this entry through the RSS 2.0 feed. Both comments and pings are currently closed.