The Hook: Letters to Zell by Camille Griep 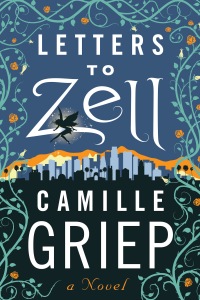 We were all waiting for you at the Swinging Vine so we could start our book club, when poor DJ dropped your note off with the first round of wine. You won’t be surprised to learn Bianca went off like a confetti cannon, pelting him with accusations of cowardice and collusion.

All this drama to let us know you left to manage a unicorn preserve? I thought that sort of rural charity work was only for indulgent royalty out West. You said in your note, “I’ve always dreamed of making a difference.” Since when? I know you love animals, but this is a bit more involved than leaving a saucer of milk out for stray kittens.

Letters to Zell is the story of what happens when CeCi (Cinderella), Bianca (Snow White), and Rory (Sleeping Beauty) begin to compare their dreams with the expectations of adulthood and womanhood.

This examination – and the adventure that follows – does not come without a catalyst. Not only is Rapunzel (Zell) the recipient of the letters within, her own self-examination and subsequent departure sets things in motion, as her friends react to the news she’s decided to chase her dream of opening a unicorn preserve.

As was told to me so often as I wrote this, fairy tale retellings are a dime a dozen these days. In order to use these Grimm princesses as a mirror for reality, I chose not to retell their tales, but to work in the blank space of their unwritten Happily Ever Afters.

I began Letters to Zell at the wine bar after the info bomb for three reasons:

1. Because the novel is quite satire-heavy, I wanted to take the clichés of female friendship, wine bars and book clubs, trashy novels and secrets, and smash them into a sit-com ready tableau. Here we meet three friends waiting around for a fourth, who not only isn’t going to show, but has cleared out entirely.

2. We’re immediately immersed in the three voices we’ll hear for the rest of the narrative – though we begin with their personalities turned up to eleven, as any good satire does.

The first letter belongs to the wry and practical CeCi, who explains the reactions of the foul-mouthed loose cannon, Bianca, and the correspondingly prim and proper Rory. CeCi herself puzzles over Zell’s motives for wanting something more, for leaving, and for not saying goodbye – incidentally proving Zell’s fears of a messy farewell would have been more than founded.

3. Starting the book here also gave me the ability to immediately introduce the internal conflict and central theme of the book. While CeCi is hurt and indignant, she’s also profoundly curious, even jealous. Her ensuing realization that her love of cooking could become something more permanent blossoms into her excursions in Los Angeles, enrollment in cooking school, and the close examination of the future she is supposed to want.

Settling in with CeCi, the most reliable of the three narrators, puts the reader on a path toward appreciating the arcs of the more extreme of their number. As the satire softens and the clichés fall away, CeCi will continue to guide the reader via utilizing her stature as Zell’s very best friend. I hope fairy tale and epistolary aficionados alike will find joy in this intimate tale of contemporary friendship and the pursuit of happiness.

Buy Letters to Zell on Amazon.

Camille Griep lives and writes just north of Seattle, Washington. She is the managing editor of Easy Street and a senior editor at The Lascaux Review. Letters to Zell, is her first novel. You can read more at www.camillegriep.com or chat with her on Twitter @camillethegriep.

This entry was posted on Wednesday, July 1st, 2015 at 7:53 pm and is filed under Guest post. You can follow any responses to this entry through the RSS 2.0 feed. Both comments and pings are currently closed.

2 Responses to The Hook: Letters to Zell by Camille Griep