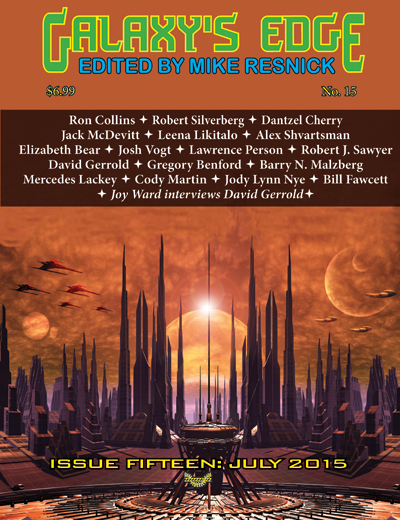 The July issue of Galaxy’s Edge is now live, and you can read my novelette, “Islands in the Sargasso”, for free — but only for the next couple of months, until the September issue is released and then you’ll have to buy the issue. So, read now! It has alien invasion fleets, a galaxy-spanning conspiracy, and drug addiction.

I always love being published in Galaxy’s Edge — not only because it’s edited by Mike Resnick, whom I greatly admire, but also because I get to share the table of contents with all kinds of cool people. Just look at the above!

At 8000 words, “Islands in the Sargasso” will briefly become the longest piece of my fiction available — but only briefly. The H. G. Wells, Secret Agent novella is coming out very soon! In fact, July 2015 will have more new words written by me released into the world than any month prior. I’m super excited!

This entry was posted on Tuesday, June 30th, 2015 at 10:25 pm and is filed under Acceptances & Publications. You can follow any responses to this entry through the RSS 2.0 feed. Both comments and pings are currently closed.