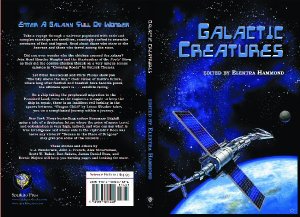 A few months ago I announced the sale of “The Dragon Ships of Tycho” to an upcoming anthology.  Today I’m thrilled to be able to post some additional details about it. The anthology is called “Galactic Creatures” and is forthcoming from the Sparkito imprint of Dark Quest Books in late May.

“Galactic Creatures” editor Elektra Hammond posted the cover art (above) and the table of contents on her blog yesterday. The anthology will be published in trade paperback format ($14.95) and as an e-book, and will debut at BaltiCon on Memorial Day weekend.

“Galactic Creatures” was the first project I’ve been directly invited to participate in. It is what’s called a “private anthology.” While some editors call for public submissions and wade through hundreds of slush stories to find a few gems, oftentimes editors contact a handful of authors whose work they’ve enjoyed in the past directly and ask them to write something that fits the theme. Such an invitation is not a guarantee of publication — write a dud and you’ll end up rejected just as quickly as you might from anywhere else. But, once invited, your odds are very good indeed.

Mrs. Hammond copy-edited another story of mine, for another publication. She liked it enough to offer me a chance to write something for her upcoming project, and I was happy to oblige. Since then I’ve been invited to two other anthologies (and let me tell you, the VIP ride past the slush pile NEVER gets old!) — but it’s always the first such opportunity that is the most memorable.

As we get closer to the release date I will blog more about this anthology, revealing its theme and other details when they become available from Dark Quest Books (wouldn’t want to spoil any info ahead of the publisher!). I’m also hoping to attend the launch party at BaltiCon, schedule permitting.