Unidentified Funny Objects 7 will be published in October/November 2018 time frame and include 20 humorous short stories:

“The Dragon, the Drudge, and the Drone” by Esther Friesner
“Dethroning the Champeen” (a Lucifer Jones tale) by Mike Resnick
“The Vampire’s Apprentice” by Gini Koch
“Falling’s Free, Gravity Costs” by Seanan McGuire
“The Sit Down” by Laura Resnick
“Chad vs. the Rebel Alliance” by Shane Halbach
“Old School: An Oral History of Captain Dick Chase” by Val Nolan
“Quick Cash in the Old Kingdom” by Elin Korund
“The Fermi Loneliness Problem” by Beth Goder
“The Secret Destiny of Heroes” by Matthew Bailey
“Spear Carrier’s Union #109” by Jamie Kress
“The Day After Halloween” by Greg Sisco
“Key Fang and Klaw” by Fred Stesney
“The Assassination of 2063” by David Vaughan
“Bimple Bimple Bop Bop” by Richard Anderson
“The Ebony Egg” by David Vierling
“Take Meme to Your Leader” by Jennifer Lee Rossman
“Mission Log Nuptuals” by Langley Hyde
“Contractual Obligations” by C. Flynt
“Three Ways to Leave Hawaii” by Zach Shephard

It will also include nine original interior illustrations by Barry Munden. 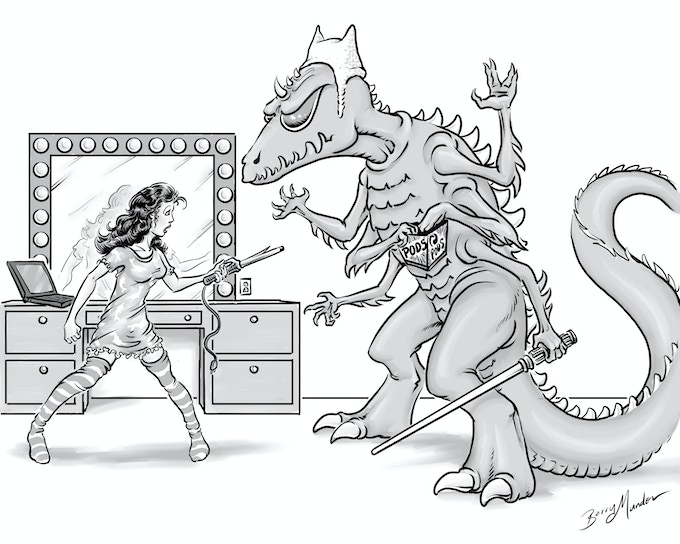 I’ve launched the Kickstarter campaign for this book which will run through August 30. It features a number of unique rewards as well as the chance to order UFO7 and other UFO Publishing books. Although I normally launch the Kickstarter in March followed by the open submission window in April, I was unable to do so this year due to a variety of health-related issues and deadlines for both writing-related projects and my day job. So I’m doing this very late in the game, but hope everyone’s enthusiasm for the project will not have been lessened by this delay!

This entry was posted on Tuesday, July 24th, 2018 at 8:34 am and is filed under Publishing. You can follow any responses to this entry through the RSS 2.0 feed. Both comments and pings are currently closed.

One Response to UFO7 Cover and TOC Reveal