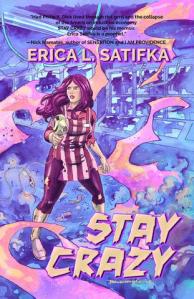 Dr. Atchison never trimmed his nose hairs. That was the first thing Emmeline Kalberg hated about him. There were other reasons to hate him, of course: his condescending tone, his haughty manner, the way he’d tear apart your room when you were out at group therapy – all in the name of “mental health,” of course. But the nose hairs, those were Em’s main complaint about the good doctor, and she trembled with the urge to leap over his weathered oak desk and pull them out herself.

“I’m not sure you’re ready, Ms. Kalberg.” Atchison flipped through the thick file in front of him, brow knitted. He paused for a long while before setting down the file and placing his pale, manicured hands atop it.

“Please, Dr. Atchison,” Em said, “I have to go home today. My mother is driving all the way here to pick me up.”

The doctor sighed, a little high-pitched whine that made Em want to strangle him. “Well, the other doctors seem to think you’re well enough to go. They’re probably right.”

What you mean, Em thought, is that my insurance ran out. But she forced a smile, and kept her mouth shut.

Stay Crazy is about the battle between two opposing otherworldly forces, centered on an interdimensional nexus point that just happens to reside within a big-box store in small town Pennsylvania.

But the opening doesn’t show any of that, because the novel is shown from the perspective of Em Kalberg, a woman recently diagnosed with paranoid schizophrenia who isn’t sure if the cosmic forces are even real. At the novel’s start, she’s being released from a mental hospital after a two-month stay, and she’s full of anger, mostly at herself. But she can’t express her anger the way she wants to, so she focuses on random pet peeves, like nose hairs and imagined whines.

I chose this scene to open the book because it’s the start of Em picking her life back up. It’s the transition between the “before” and the “after,” when her entire circumstances have completely changed. Little does she know that things are about to change again, when she gets a job at Savertown USA (the fictional big-box store) and finds herself tangled in an invisible war.

The beginning of the book, though, doesn’t necessarily tip the reader into knowing this is science fiction, and that’s something I had to consider carefully. If someone missed the cover and the back cover copy and the fact that it’s published by Apex, would they think I had committed an act of – gasp – literary fiction? However, I just ran with it, because Em’s personal journey of accepting her mental illness is just as important as the spec-fic shenanigans.

Em has a healthy mistrust of authority, which proves useful to the plot and which you can see right away. While her stay at the hospital was probably for the best, in her opinion it’s gone on entirely too long. Her sarcastic, antagonistic relationship with Dr. Atchison is repeated over and over with other well-meaning authority figures, and avoiding a return trip to the mental hospital
is one of her primary goals.

Will she succeed in staying out of the hospital? Will the destruction of the universe be stopped?

And just what goes on behind the scenes of an entity-haunted big-box store anyway? Read Stay Crazy and find out for yourself!

Erica L. Satifka is a writer and/or friendly artificial construct, forged in a heady mix of iced coffee and sarcasm. She enjoys rainy days, questioning reality, ignoring her to-do list, and adding to her collection of tattoos. Her short fiction has appeared in Clarkesworld, Shimmer, Lightspeed, and Intergalactic Medicine Show, and her debut novel Stay Crazy was released in August 2016 by Apex Publications. Originally from Pittsburgh, she now lives in Portland, Oregon with her spouse Rob and an indeterminate number of cats. Visit her online at www.ericasatifka.com.

This entry was posted on Monday, August 15th, 2016 at 10:58 am and is filed under Guest post. You can follow any responses to this entry through the RSS 2.0 feed. Both comments and pings are currently closed.