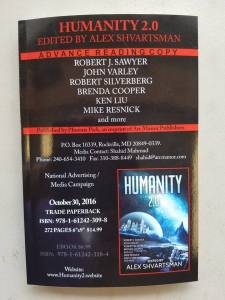 This has been an especially busy six months for me when it comes to anthology projects. My writing has suffered (though I’m getting back on the horse now that the significant bulk of anthology work is done for the year.) Today shiny print copies of the Advance Reading Copy of HUMANITY 2.0 showed up at my office, and so I thought it might be a good time to update readers on my various anthologies published, in progress, and planned for the future: 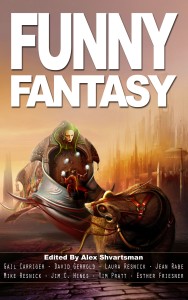 I began work on this book in late 2015 and it was published this Spring. The turnaround on reprint-only anthologies is really fast. There’s only minor editing; the bulk of the time investment is in selecting the stories. This was a follow-up to the popular Funny Science Fiction antho from last year and it’s doing quite well. If you don’t yet have a copy, grab it here. 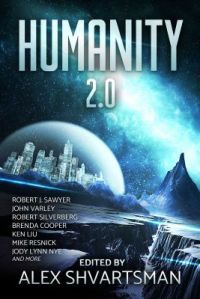 I’m really excited about this book as it is my first hard SF anthology. I turned the manuscript in to the publisher (Arc Manor/Phoenix Pick) a couple of months ago and the book was copy edited, proofread and laid out. The ARCs (advance reading copies) are being sent out to reviewers as we speak and the book will be published in October. 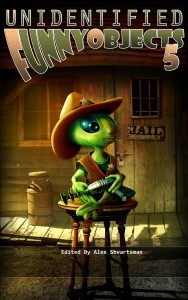 The book is in the very final stages of copy edits, about to be sent out to the layout designer in the next few days. I’m falling a week or two behind schedule on this one, but not severely so (UFO4 was delivered to the designer on June 30 and was published on schedule.) I’m hopefuly we will once again have it in time for a Capclave launch in October.

This project I’m really behind on. I’m sitting on a number of stories I consider for inclusion, but there’s a lot more reading to do, and I haven’t had the chance to do it yet. My goal is to allocate some time to this in the coming month. I would rather push back the release than publish the book with less than 100% of the stories I really like, so the amount of great content I find will dictate the release date for this one.

I’m weeks if not days away from announcing another anthology project, and I pretty much guarantee both the fans of my writing and fans of my anthology work will dig this one. I can’t say more until the ink is dry on the contract, but as soon as that happens, the announcement will be made! This anthology will likely be released in late 2017 or early 2018.

This is slated for sometime in 2017; I haven’t done much work but I’m sort-of passively collecting great stories. I hope that, by the time I roll up my sleeves on this project for real (likely late this year) I will have a good chunk of the book filled.

There will, of course, be more volumes of UFO for as long as I have the health and the financial means to publish them. I’ve done no work on this one at all, as I typically begin inviting headliners and laying out other groundwork once the previous volume is off to the printer. So I will begin contacting headliners later this summer or early autumn.

UFO6 will definitely have an open submission window, while most other projects will be filled by invitation and/or recommendation when it comes to reprints. If you know of a funny story that was published elsewhere and fits the science fiction or horror genres, I’d love to hear about it. If I like it enough, it will make it onto my consideration list and eventually I will solicit FSF2 and FH anthologies from the stories on that list.

This entry was posted on Thursday, June 23rd, 2016 at 7:49 pm and is filed under Publishing. You can follow any responses to this entry through the RSS 2.0 feed. Both comments and pings are currently closed.