The Hook: The Clockwork Crown by Beth Cato 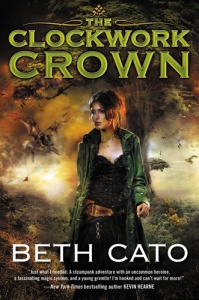 As she rode through the snowy wilderness of far southern Caskentia, Octavia Leander’s spirits were buoyed by three thoughts: that although she fled from assassination and capture, she was undoubtedly in one of the most beautiful places she had ever seen; that thus far they had survived a full week without any sign of pursuit by horse or buzzer; and that her companion in the hard journey was Alonzo Garret, a man who had forfeited his career as a Clockwork Dagger–and possibly his life–in order to keep her alive.

Considering the dire circumstances, he made for delightful company.

Alonzo rode ahead on a chestnut bay stallion, their gray pack horse following close behind. This far from civilization, the world was utterly quiet but for the jingling of tack, the horses’ breathing and the steady rhythm of their hooves, and the radiant life songs of the horses, Alonzo, and any wildlife within close range. In particular, she took comfort in the ever-present marching band brasses of Alonzo’s life essence; she would recognize his particular notes in any crowd.

This is the opening of my steampunk fantasy novel The Clockwork Crown, the sequel to The Clockwork Dagger. That book featured healer Octavia Leander caught in a vicious game of tug-of-war between her corrupt government of Caskentia and separatists in a desolate territory known as the Waste. It had a heavy dose of espionage, royal tragedy, airship travel, and cuteness in the form of little green gremlins.

Writing a sequel is intimidating. There’s immense pressure right away to establish the setting, characters, and the lingering plot issues from the previous book, and to do so without it being a boring info dump.

I opened the book with my heroine, Octavia, making three observations. This style of opening has now become a superstitious stand-by for me. I wrote an urban fantasy novel years ago that opened with three points like this; that book connected me with my agent, though it didn’t sell. I then had The Clockwork Dagger‘s first paragraph also start with three notes.

Yes, I continue this tradition with my next project, too. So far, each of these books has brought something awesome to my life and/or sold. Why mess with a good thing?

Here, I used that technique to introduce the stakes right away: Octavia and Alonzo are being hunted. Since a lot of world-building is necessary right away, I wanted to balance information with a high-tension action scene. You know that things have been uneventful for them for a week, but that’s going to change right away.

With the personal stakes established, I moved on to another important element of the books: Octavia’s magic. She’s a medician who draws her healing powers from a world tree known as the Lady. In the grand tradition of most leading characters, Octavia is abnormally powerful. When she is close to other people or animals, she hears their health in the form of song. Her magical talents are one reason why they are being hunted, and her abilities have gotten stronger over a very brief span of time. This is not a good thing.

Octavia’s insight also introduces Alonzo. I wanted to establish that there is chemistry between these characters and a potential romance, though that’s not the central point of the book. Survival is. In that, Octavia and Alonzo rely on each other and the unique skills they meld to form a solid team.

Until now, I didn’t realize how many plot threads I built into those first 180 words. Huh.

Really, these opening paragraphs are the last moments of peace Octavia and Alonzo will know for the next while. All hell is about to break loose, and I hope that readers enjoy the crazy ride.

Buy The Clockwork Crown on Amazon

Beth Cato hails from Hanford, California, but currently writes and bakes cookies in a lair west of Phoenix, Arizona. She shares the household with a hockey-loving husband, a numbers-obsessed son, and a cat the size of a canned ham.

She’s the author of The Clockwork Dagger steampunk fantasy series from Harper Voyager. The newest book, The Clockwork Crown, comes out on June 9th, 2015.

This entry was posted on Tuesday, June 9th, 2015 at 1:36 pm and is filed under Uncategorized. You can follow any responses to this entry through the RSS 2.0 feed. Both comments and pings are currently closed.

One Response to The Hook: The Clockwork Crown by Beth Cato