This is not what I wanted to write about today.

Terry Pratchett, best known for his series of Discworld novels, was one of the most important voices in speculative humor.  His work had a profound influence on generations of writers, and brightened lives of millions of readers worldwide. I never personally met him or got an opportunity to work with him, and feel there is little I can say to add to the loud chorus of voices more eloquent and more relevant on this subject than my own, but I will say this: whether you are a long-time fan or are learning about him now, should you wish to honor his memory, the best way to do so is by reading (or re-reading) one of his books.

A few years ago I reached out to Mr. Pratchett to see if I might be able to acquire a reprint (or, who knows, even an original story!) for one of the UFO volumes. His agent got back to me and declined to sell me a reprint, because there would be a short story collection coming out soon and he wasn’t interested in shopping short story reprints around, at least not at the rates UFO could afford. And so I didn’t get to publish Terry, but although this collection took longer than expected, it is actually coming out in less than a week.

I’ll be picking up a copy of “A Blink of the Screen” and humbly suggest that you do so as well. 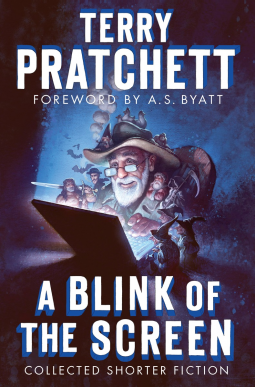 * The Unidentified Funny Objects 4 Kickstarter campaign is going well. After three days, we have nearly 120 backers and are only a few hundred dollars away from 50% of the funding. There’s always a slow-down in the middle (offset by lots of activity in the first few and last few days of the campaign), but momentum counts, so if you plan on backing this book, please don’t wait for the last day!

* I accepted a flash story by Brent C. Smith titled “The Transformation of Prince Humphrey” for UFO4. I read an earlier version of this story in a contest we both participated in, and out of 200+ stories I read for that contest it was my favorite. So I reached out to him and, after a few rounds of edits, accepted the updated variant of the story for the book. Don’t worry though: there’s plenty of room for stories that will come in during the open submission period next month!

* Two of my own stories found new homes (well, the same home, actually.)  Mike Resnick accepted both for publication in Galaxy’s Edge.

“Islands in the Sargasso” is an 8000-word space opera novelette in the shared world setting regular readers of Galaxy’s Edge are already familiar with. I had the pleasure of advancing the setting by 200 years and allowing humans to finally escape the confines of our solar system — but you’ll have to read the story to learn the details.

“Dreidel of Dread: The Very Cthulhu Channukah” is one of the silliest humor flash pieces I’ve ever written. It makes fun of saccharine Christmas specials, uses copious amounts of Jewish humor, quotes both Einstein and The Ghostbusters film… and, of course, there’s Cthulhu!

Both stories should be appearing in GE later this year.

This entry was posted on Thursday, March 12th, 2015 at 10:48 pm and is filed under Acceptances & Publications. You can follow any responses to this entry through the RSS 2.0 feed. Both comments and pings are currently closed.

One Response to RIP Terry Pratchett