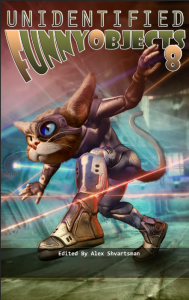 “The 10:40 Appointment at the NYC Department of Superhero Registration” by Chris Hepler

“The Fellowship of the Mangled Scepter” by James Wesley Rogers

“When the “Martians” Return” by David Gerrold

“Black Note, in His Transition to a Supreme State of Wokeness” by James Beamon

“The Other Ted” by Wendy Mass and Rob Dircks

“Journey to Perfection” by Larry Hodges

“The Punctuation Factory” by Beth Goder

“One Born Every Minute” by C. Flynt

“Shy and Retiring” by Esther Friesner

We’re in the copy edits stage and the book should be released by early October.

This entry was posted on Saturday, June 20th, 2020 at 4:36 pm and is filed under Publishing. You can follow any responses to this entry through the RSS 2.0 feed. You can leave a response, or trackback from your own site.