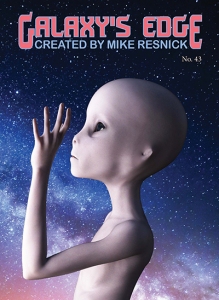 I have a new story out, and it’s bittersweet.

It was the last story of mine acquired by Mike Resnick before he passed. Mike has been a friend and a mentor. I’ve edited and published his work, and he bought and published a number of my stories in his magazine. I had the honor of appearing in the very first issue, and a number of times since. This is now issue #43 of a bi-monthly magazine going into its eighth year — a huge rarity in the SF/F zine field. And it’s still there. It’s still going strong.

Publisher Shahid Mahmud and the new editor-in-chief Lezli Robyn will keep things going. Lezli is not so new — she’s been there, behind the scenes, from the beginning, tirelessly working on loads of magazine-related stuff and other Arc Manor projects. And Shahid is as professional and committed as any publisher I’ve ever worked with. But this magazine has always been Mike’s baby. His spirit permeates it. His name will remain on the cover as the creator, which is very cool. Every issue going forward will be a small tribute to Mike, from those of us writing for it, editing it, or reading it.

This issue also has dozens of appreciations written about Mike by people whose lives he’s touched. I wrote one of those as well. Check them out.

And when the mood strikes you, check out my story. It’s about trickster gods from different cultures getting together to play Texas Hold ‘Em. It will be available online for free for the next two months, until the next issue replaces it, and thereafter available wherever the magazine is sold.

This entry was posted on Monday, March 2nd, 2020 at 10:35 am and is filed under Acceptances & Publications. You can follow any responses to this entry through the RSS 2.0 feed. Both comments and pings are currently closed.