New publication: “Masquerade Night” in In a Cat’s Eye anthology 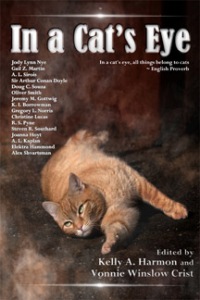 There have been lots of cat anthologies and there surely will be lots more. But that’s only because we never get tired of reading them! In a Cat’s Eye features original stories by Jody Lynn Nye, Gail Z. Martin, Elektra Hammond and others, as well as an all-new horror (well, horror-adjacent at least) story from yours truly.

“Masquerade Night” is about a dance club in 1920s New York City where ancient gods and monsters mingle with unsuspecting humans.  Here are the opening lines

The first time Harat saw Ada was when she was dancing with the goddess of death.

It was masquerade night, and cub Rhythm was full of monsters. An orchestra blasted the latest European tunes at their highest volume setting, filling the cavernous dance hall with music. Dance beats reverberated in Harat’s temples. An engine rotated an enormous lantern of painted glass suspended from the high ceiling, which cast shards of colored light across the hall. It was the glint of light against the lapis lazuli amulet that drew his attention.

Want to read more? Grab the e-book or a paperback here.

This entry was posted on Saturday, October 22nd, 2016 at 10:39 am and is filed under Acceptances & Publications. You can follow any responses to this entry through the RSS 2.0 feed. Both comments and pings are currently closed.