The Hook: Domnall and the Borrowed Child by Sylvia Spruck Wrigley 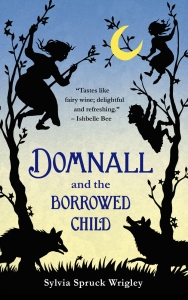 For centuries–more than that, millennia!–since the beginning of time itself, the fae had celebrated the Spring by finding the bluebells and creating a faerie ring. And now, apparently, that was all over. Too dangerous, squeaked the Council. Times have changed. Tradition simply tossed to the wind like dandelion seeds.

Domnall stabbed his walking stick into the muddy earth to navigate the bog as carefully as possible. Dirty snow still crusted the north side of the hills. He spat and trudged through the mud as the afternoon sun sunk low. Maybe he should head out, leave this place and plead for safe passage from the sluagh–they still ruled their lands, at least. A chortle escaped him at the thought of his short round self jogging behind a pack of high-flying sluagh, terrorising the local villages. Maybe not.

A scrabbling sound ahead broke into his thoughts and he froze, scanning the scrubby land for movement. When nothing else stirred, he crept carefully towards the protection of the woods.

Domnall and the Borrowed Child is a traditional fantasy story set in Scotland and follows the tribulations of an old and cranky scout named Domnall. When a Seelie child falls deathly ill, Domnall has to trick a human family into giving it Mother’s milk, an old ploy of the good folk but one that they haven’t had to resort to in a century or more. Domnall faces cunning humans, hungry wolves, and uncooperative sheep in his attempt to save the child.

I had two challenges to tackle in the first few paragraphs of the book. The first was to quickly make it clear that it was not a fairy tale and definitely not a children’s story. Domnall is lovable (well, I like to think so) but very much for adults. The second challenge was to make it clear that these were not Disney fairies who loved humans but instead a separate culture with their own politics and viewpoint.

Originally the story started in front of the Sithein, with Domnall speaking to his friend when Maeve comes out to tell him that they need his services. The opening scene was completely serviceable but it was a bad place to try to feed in the backstory.

Usually, I try to drip-feed information later in the story but in this case, I backed up instead. In that initial scene, Maeve is interrupting Domnall’s evening because she has an emergency, so I had to think about what she was interrupting. His peace and quiet, of course, but why did he feel he deserved it? The answer could only be because he’d spent all day on a thankless task. This gave me a great new scene and an opportunity to introduce Domnall properly, not just as the Sithein’s scout and all-around friendly guy. His internal frustration at the politics of the Sithein and the changing world was allowed full reign. Of course, his thoughts needed to be interspersed with action, so I took the chance to show his interactions to his environment and, a few paragraphs in, his reaction to a human child wandering through the forest.

This is interesting because usually I would attempt to drop the reader into the action in the first few paragraphs. This time, instead of setting up the plotline with Maeve, I slowed things down and offered an introduction to the narrator, the world and (most importantly) the type of book to expect. Domnall’s story is more of a fun romp than high action and adventure, so this hook sets the mood.

It’s not general advice that I would give for working out where the story starts but in this case, it was right for the story.

Buy Domnall and the Borrowed Child on Amazon.

Sylvia Spruck Wrigley was born in Germany and spent her childhood in Los Angeles. She emigrated to Scotland in 1990, guiding German tourists around the Trossachs while she searched for the supernatural. She now splits her time between South Wales and Andalucia where she writes about plane crashes and faeries, which have more in common than most people might imagine. Her short stories have been translated into over a dozen languages. Domnall and the Borrowed Child was released this week by  Tor.com as a part of their new novella imprint. You can find out more about it at http://domnall.intrigue.co.uk

This entry was posted on Wednesday, November 11th, 2015 at 9:29 pm and is filed under Guest post. You can follow any responses to this entry through the RSS 2.0 feed. Both comments and pings are currently closed.