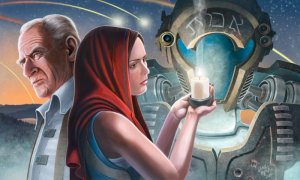 Edmund Schubert, a long-time editor-in-chief of InterGalactic Medicine Show announced today that he is withdrawing from consideration for the Best Editor – Short Form Hugo Award. In addition, he has created a sampler of stories which he would have used as his Hugo sampler and (with authors’ permission) made them available for everyone to read free of charge.

You can read the sampler (including my story, “The Golem of Deneb Seven” here.

With his kind permission, I’m re-posting his withdrawal letter.

My name is Edmund R. Schubert, and I am announcing my withdrawal from the Hugo category of Best Editor (Short Form). My withdrawal comes with complications, but if you’ll bear with me, I’ll do my best to explain.

I am withdrawing because:

Regrettably this situation is complicated by the fact that when I came to this decision, the WorldCon organizers told me the ballot was ‘frozen.’ This is a pity, because in addition to wanting ‘out’ of the ping pong match, I would very much have liked to see someone else who had earned it on their own (without the benefit of a slate) get on the ballot in my place. But the ballots had already been sent off to the printers. Unfortunately this may reduce my actions to a symbolic gesture, but I can’t let that prevent me from following my conscience.

So it seems that the best I can do at this stage is ask everyone with a Hugo ballot to pretend I’m not there. Ignore my name, because if they call my name at the award ceremony, I won’t accept the chrome rocketship. My name may be on that ballot, but it’s not there the way I’d have preferred.

I will not, however, advocate for an across-the-board No Award vote. That penalizes people who are innocent, for the sake of making a political point. Vox Day chose to put himself and his publishing company, Castalia House, in the crosshairs, which makes him fair game—but not everybody, not unilaterally. I can’t support that.

Here’s what I do want to do, though, to address where I think the Sad Puppies were off-target: I don’t think storming the gates of WorldCon was the right way to bring attention to worthy stories. Whether or not you take the Puppies at their word is beside the matter; it’s what they said they wanted, and I think bringing attention to under-represented work is an excellent idea.

So I want to expand the reading pool.

Of course, I always think more reading is a good thing. Reading is awesome. Reading—fiction, specifically—has been proven to make people more empathetic, and God knows we need as much empathy as we can possibly get these days. I also believe that when readers give new works by new authors an honest chance, they’ll find things they appreciate and enjoy.

In that spirit, I am taking the material that would have comprised my part of the Hugo Voters Packet and making it available to everyone, everywhere, for free, whether they have a WorldCon membership or not. Take it. Read it. Share it. It’s yours to do with as you will.

The only thing I ask is that whatever you do, do it honestly.

Don’t like some of these stories? That’s cool; at least I’ll know you don’t like them because you read them, not because you disagree with political ideologies that have nothing to do with the stories.

But whatever you decide, decide it honestly, not to score a point.

And let me be clear about this: While I strongly disagree with the way Sad Puppies went about it… when the Puppies say they feel shut out because of their politics, it’s hard for me to not empathize because I’ve seen IGMS’s authors chastised for selling their story to us, simply because of people’s perceptions about the publisher’s personal views. I’ve also seen people refuse to read any of the stories published in IGMS for the same reason.

With regard to that, I want to repeat something I’ve said previously: while Orson Scott Card and I disagree on several social and political subjects, we respect each other and don’t let it get in the way of IGMS’s true goal: supporting writers and artists of all backgrounds and preferences. The truth is that Card is neither devil nor saint; he’s just a man who wants to support writers and artists—and he doesn’t let anything stand in the way of that.

IGMS—Orson Scott Card’s InterGalactic Medicine Show—is open to everyone. All the way. Always has been, always will be. All I ask, all I have ever asked, is that people’s minds operate in the same fashion.

Consider this the beginning then of the larger reading campaign that should have been. To kick it off, I offer you this sampling from IGMS, which represents the essence of how I see the magazine—a reflection of the kind of stories I want to fill IGMS with, that will help make it the kind of magazine I want IGMS to be—and that I believe it can be if readers and writers alike will give it a fair chance.

If you have reading suggestions of your own, I heartily encourage you help me build and distribute a list.

(Yes, I know, there are already plenty of reading lists out there. But you will never convince me that there is such a thing as too much reading. Never.)

I, for one, am sad about Edmund’s decision. He was on my nominating ballot (and I had no association nor even knowledge of what was on the Puppy slates). I know of at least several other fans who nominated him as well. I hope to see him back on a future ballot sooner, rather than later.

This entry was posted on Monday, April 27th, 2015 at 6:04 pm and is filed under Guest post. You can follow any responses to this entry through the RSS 2.0 feed. Both comments and pings are currently closed.

4 Responses to Edmund Schubert Withdraws From the Hugo Award Consideration