The Hook: Superposition by David Walton 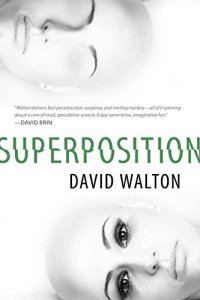 I should have known better than to let him in.  Brian Vanderhall showed up on my doorstep in the falling snow wearing flip-flops, track shorts, and an old MIT T-shirt, the breath steaming from his mouth in little white gusts.  It would have saved me a lot of trouble if I had slammed the door in his face, never mind the cold.  Instead, like a fool, I stepped aside.

Some stories start with a bang: an explosion, a death, a fire, or an arrest.  Others start more subtly, perhaps even with an event the character himself doesn’t realize will be momentous.  Either way, a story almost always begins with the moment everything changes for the main character.  It’s the spark that kicks off all the action and danger in the rest of the book.  The point when, whether the characters recognize it or not, their problems begin, and there’s no going back.

In Superposition, it’s the moment Jacob Kelley opens the door.  Before an hour is past, the man he lets in will have demonstrated an unsettling new technology and fired a gun at Jacob’s wife.  But although he doesn’t know it, it’s the moment he opens the door and steps aside that turns his life upside-down forever.

That’s why I think this first paragraph works as a hook, despite its relative simplicity.  A man comes to the house; his friend lets him in.  Not much to it, on the surface.  But there are clues to the reader that something more sinister is afoot.  For example, Vanderhall is badly dressed for the weather, as if he ran out into the snow with no time to throw on shoes or a coat.  Why?  Was he afraid?  Of what?  Also, the narrator says that he regrets letting him in (“like a fool, I stepped aside”), implying that there is trouble coming.  There’s also the suggestion that Vanderhall has been trouble in the past (“I should have known better”).

These clues work together to give the reader a sense of unease, of unsolved mystery, of trouble to come.  That trouble won’t take long to materialize–before the day is over, Vanderhall turns up dead and Jacob is arrested for his murder, and a relentless quantum intelligence attacks Jacob’s family.  I hope you’ll consider picking up a copy, and reading what happens next!

David Walton is the author of the newly released novel Superposition, a quantum physics murder mystery with the same mind-bending, breathless action as films like Inception and Minority Report.  His other works include the Philip K. Dick Award-winning Terminal Mind, the historical fantasy Quintessence (Tor, 2013) and its sequel, Quintessence Sky.  You can read about his books and life at http://www.davidwaltonfiction.com/.

This entry was posted on Friday, April 10th, 2015 at 6:53 pm and is filed under Guest post. You can follow any responses to this entry through the RSS 2.0 feed. Both comments and pings are currently closed.