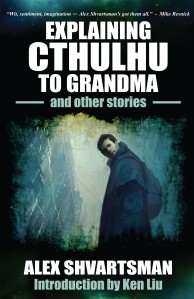 The first of the Explaining Cthulhu to Grandma and Other Stories physical copies have began reaching readers this week, and it’s a surreal feeling. I’m beyond excited for the February 1 official release. I’m lining up lots of different promotional things for the book: blog posts, interviews, giveaways, convention appearances and such. But ultimately, I’m just one guy. That’s why my friends’ help on social media has been so huge!

The official release date for the book is February 1st, and I’m trying to organize a Thunderclap to set off on that Sunday morning. What is Thunderclap and how it works, you ask?

Thunderclap is a web app that will synchronize and simultaneously post a message on the willing users’ Twitter, Facebook, and/or Tumblr feeds. It’s free to use and takes less than 10 seconds to join, but there is a catch: like Kickstarter, it won’t fire off unless a minimum amount of people join in. That minimum is 100. So if you don’t mind posting a message about my book’s release on any of those three social media feeds, would you please click below and join in?

Also, the early reviews for the collection are in, and they’re very positive! So far it has been reviewed by:

Fantastica Ficcion (Note: this last one is in Spanish.)

This entry was posted on Thursday, January 22nd, 2015 at 10:48 pm and is filed under Publishing. You can follow any responses to this entry through the RSS 2.0 feed. Both comments and pings are currently closed.