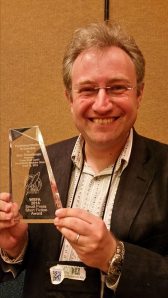 OK, now that I got that out of my system, let’s try again:

This Saturday, at the award ceremony held at Capclave, I won the WSFA Small Press Award for Short Fiction. I won it for “Explaining Cthulhu to Grandma,” which also makes this a win for Intergalactic Medicine Show, its editor Edmund Schubert and his staff, because they accepted and published this story!

Small Press means everybody but the major publishers. So while Tor.com may be out, it still includes top-notch markets like Clarkesworld and Lightspeed (both of which had stories represented this year). The stories the  board considers are also read blind, so the author’s name won’t sway them–which makes it more likely the award finalists would be selected on merit rather than popularity.

I was very excited to be nominated but didn’t seriously expect to win. I mean, humorous short stories don’t win award any more often than comedies win the Oscars.  I’m incredibly thrilled and very thankful to the WSFA members who proved me wrong and voted for my story.

I was already having a great time at Capclave, which is rapidly becoming my favorite convention. It is relatively small and laser-focused on fiction (it doesn’t really have an anime track or a costuming track or much gaming, things that go hand-in-hand with science fiction conventions at most cons). Instead, you get a very distilled group of fans and professionals who love genre fiction.  Not that fiction is the only subject of merit. This past weekend I got to talk psychology with Lawrence Schoen, geopolitical implications of the Russia/Ukraine conflict with Chuck Gannon, and whether it is sin or virtue that hypothetically makes a soul more attractive to Satan with Max Gladstone (true story!). There were many other conversations like this, and seeing old friends, and making new ones. But, you can imagine, how I was having even more fun, clutching at the award!

When I got the nomination it took me about a week to come down. There’s no telling how long it will take now. That’s why I’m rambling incoherently in this blog post, instead of employing the level of snark you’re normally accustomed to. Seriously, I’m elated, and exhausted, and still a little sleep-deprived. But I wanted to post something before too long, and here it is.

I should also add that “Explaining Cthulhu to Grandma” can still be read for free at IGMS, so if you haven’t read it yet, check it out!

This entry was posted on Tuesday, October 14th, 2014 at 10:58 am and is filed under Event Appearances. You can follow any responses to this entry through the RSS 2.0 feed. Both comments and pings are currently closed.