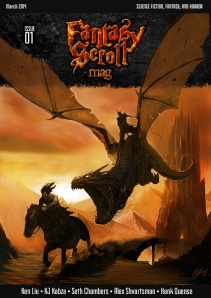 The premier issue of Fantasy Scroll is out, featuring stories by Ken Liu, KJ Kabza and others. It includes my short story “Seven Conversations in Locked Rooms” which was originally published in the Memory Eater anthology, but never before made available online. You can read the story here.

Fantasy Scroll is currently in it’s final week on Kickstarter, so if you like the content of the magazine, consider supporting them there.

And since I’ve been a little negligent about reporting recent acceptances, here are a few stories of mine you can expect to read in coming months:

“Notes on the Game in Progress, Played Almost to a Draw” – a Roger Zelazny homage flash story, was accepted at Daily Science Fiction

“One-Sided Argument” was accepted at Nature

This entry was posted on Friday, April 18th, 2014 at 10:20 am and is filed under Acceptances & Publications. You can follow any responses to this entry through the RSS 2.0 feed. Both comments and pings are currently closed.