On the Merits of Automation

Writing the first draft of a new story is always a lot of fun. You get to describe lush settings and exciting action, and have your characters say witty things. You don’t have to worry about the minor details, consistency, or proper punctuation. All of that comes later. The first draft is about getting your idea on paper.

Then comes the not-so-fun part of edits. By the time the story is finished, the author may have read it three or four times if they’re an expert (or think they are), and possibly as many as twenty times if they’re still learning the ropes or tend to do much of the heavy lifting in revision. After the first several reads it becomes very difficult to identify a basic problem in a story, such as an orphaned word left over from the previous draft or a bit of poor phrasing. Everything about the piece becomes so familiar, it is difficult to “turn off” that familiarity in order to hunt down errors.

Writers have different rituals for dealing with this. A very common and successful method is to put away a completed story for a week plus, so that you may return to it with a fresh eye, having forgotten some of the details. Other writers will read the story out loud, looking for spots where the prose sounds awkward. Others read the story from back to end, one paragraph at a time. This allows them to concentrate on the spelling and punctuation and not the plot or flow of the story.

The most effective method by far is to get another pair of eyes on your story. Swap with another writer of similar (or, preferably, greater) ability. Have them catch many of the little problems you missed, and you do the same for them later. This is my own preferred method. Every story I complete, I share with at least two or three critique partners. Each of them finds some issues with the story, which I consider before revising. Then it’s off to another couple of readers. Then and only then do I send the story out on submission.

Professional book and magazine publishers are big fans of this method as well. If your story is accepted, the editor may do some developmental edits with you, but after they’re done the story is always passed along to a copy-editor. A copy-editor is like a beta reader, but better. They are sentence-structure masters and punctuation ninjas, and can usually quote the Chicago Manual of Style (or whatever the publication’s preferred style guide is) from memory. A good copy-editor can make a tremendous difference in the quality of your book or short story.

Which begs the question — should you avail yourself of the services of a freelance editor *before* the story or novel goes out on submission, to improve your chances?

Sadly, in most cases the correct answer is no. Not because they won’t improve your work — far from it, but because it rarely makes sense financially. A good editor will charge somewhere around $30 an hour. It will cost $750-1000 to have an entire novel thoroughly edited. A 4-6000 word story may run you $50 or so, which is a huge percentage of what you can hope to earn from its sale, even if it’s placed with a pro-paying market.  There are editors who will work cheaper, and while a tiny percentage of them are brilliant people who’re just starting out, in most cases you won’t get the sort of professional a big New York publisher would hire working at deep discount rates.

So what should you do to ensure that a manuscript you’re about to send to your favorite editor or agent isn’t a hot mess?  In addition to the methods I described above, you can also take advantage of some automated tools.

Your first step is to get the most up-to-date copy of Microsoft Word  your computer can run. It does a fairly good job catching not only typos but also poorly constructed sentences and a plethora of other annoying problems. It constantly amazes me how many writers default to antiquated or free word processors in order to save a few bucks. If you plan on becoming a gourmet chef, you wouldn’t buy your knife set at a 99c store. You would get the professional quality tools.  Writing doesn’t require you to spend a lot of money up-front on supplies the way painting or sculpting does, so if you plan on writing for hours on end don’t skimp on the essentials — a comfortable chair, a good keyboard, and the best word processor program. For the record, I don’t own a Mac. There may be wonderful word processor options for the Mac that are infinitely better than MS Word, or there may not be. I just don’t know. But I have tried various PC options including Google Docs, OpenOffice and Libre Office and found the Microsoft product to be superior (which is a statement I don’t make easily as a huge Google fan).

The next step would be to try out Grammarly. 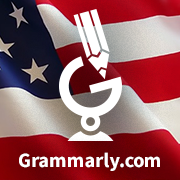 When I first discovered this web-based service, I was highly skeptical.It bills itself as “the world’s best grammar checker” and claims to “correct up to 10 times more mistakes than popular word processors.” But can they really automate copy-editing? Certainly no software, whether it’s from Microsoft or from these folks, is a substitute for a live copy-editor.  The technophobe in me was curious, and I took advantage of the review account the PR people at Grammarly were kind enough to provide me with.

I loaded a number of manuscripts into Grammarly to see if it might be useful. Predictably, it did little or nothing to help improve highly polished manuscripts that were already copy-edited by a professional. The “errors” it found were mostly unorthodox sentence structure and dialog, places in the manuscript where text structure is intentionally less-than-neat. The software couldn’t compute the difference between bad writing and artistic license, nor should it be expected to.

The results were much better when I loaded unedited first drafts. It helped identify missing or misplaced commas, tense problems, and a few actual sentence structure issues that were in legitimate need of fixing. Given that it took only a few seconds to run the text through this software, it certainly didn’t hurt to fix some of the problems before sending the story draft to crit partners.

Since showing is better than telling,  I loaded the 1000-word chunk of text above into Grammarly after I wrote it, and without going back to do any edits. Here are the issues it identified and suggestions it made:

* The results were much better when I loaded unedited first drafts. <- Grammarly suggested I review this sentence for incomplete comparisons.

* Remove the comma here: “put away a completed story for a week plus, so that you may return to it with a fresh eye”

* Add the comma in front of  “as well”: “Professional book and magazine publishers are big fans of this method as well.”

* Remove the comma here: “They are sentence-structure masters and punctuation ninjas, and can usually quote the Chicago Manual of Style…”

* Reminded me to add a space after this period: “I was highly skeptical.It bills itself…”

Each suggestion comes with citations from the rules of English grammar which are often a good read, especially for those who aren’t already masters of the language. My overall takeaway is that this service is awesome for academic purposes, especially for high school and college students who are trying to improve their “proper” writing. It is less effective for professional wordsmiths, but  can still offer enough value to justify its price point. At $30 per month I wouldn’t use it on a recurring basis for one or two short stories that I write per month, but would probably buy a month’s subscription to run a novel-length manuscript through the software before showing it off to an agent or a publisher.

And while I stated above that it doesn’t pay to have your manuscript professionally edited by a live human if you plan on submitting it to publishers, you should absolutely make such an investment if you plan on self-publishing it. Too often, self-published books suffer from poor grammar and punctuation, and contribute to the already-tarnished image of self-published writers, hurting some really talented folks who are using the platform alongside the unedited masses.

There are many great freelance editors out there who are willing to take on new clients. The one I have worked with personally and can highly recommend is Elektra Hammond.

What live editors and electronic aides do you recommend?

This entry was posted on Sunday, July 7th, 2013 at 8:08 pm and is filed under Craft of Writing. You can follow any responses to this entry through the RSS 2.0 feed. Both comments and pings are currently closed.

2 Responses to On the Merits of Automation