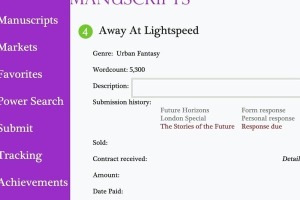 Almost exactly a month ago, Duotrope announced that they were becoming a pay site, asking writers to fork over $50 a year or $5 a month to take advantage of their robust web site and an extensive database. Many writers (myself included) felt that it’s perfectly reasonable for a site to charge a fee, but that $50 was way too much money to pay for the privilege of feeding your own data into a Wiki-style service.

Most of the writers I know agreed that $20 was the sweet spot of what such a service would be worth to them, and many posited that someone will come along and launch an alternative to Duotrope very soon. That someone turned out to be Syliva Spruck Wrigley, a speculative writer and an online marketing professional.

I expected some webhead to cobble together a very basic online database, capable of tracking subs and performing basic analysis. Sylvia’s vision is far grander. She wants to create a sophisticated, slick site with lots of social media features, a detailed market database, and varying levels of membership. In short, it would be Duotrope 2.0. Advance feature membership would cost about $20 per year but, best of all, basic features would be free.

The project, titled Submitomancy, is currently seeking 5,500 British Pounds (or around $8800) in funding.  The money will be used to pay programmers and developers, and cool additional features can be unlocked via stretch goals.

So yeah, that $20 I was going to donate to Duotrope this year? Sumbitomancy can have it instead. Please consider buying your annual membership in advance in order to help them get off the ground sooner!

This entry was posted on Sunday, December 30th, 2012 at 9:04 pm and is filed under Uncategorized. You can follow any responses to this entry through the RSS 2.0 feed. Both comments and pings are currently closed.

One Response to Submitomancy Launches a Crowdfunding Campaign