I’m a huge fan of Mike Resnick’s fiction. I’ve been reading and enjoying his tales for years. His novel “Santiago” was among the first science fiction books I ever read in English. So I’m enormously thrilled to announce that Unidentified Funny Objects will feature his novelette “El and Al vs. Himmler’s Hideous Horde from Hell.” 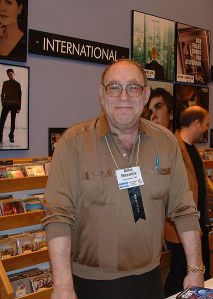 According to Locus, Mike Resnick is the all-time leading award winner, living or dead, for short fiction. He won 5 Hugos (from a record 35 nominations), a Nebula, and other major awards in the USA, France, Japan, Spain, Croatia, and Poland. He’s the author of 64 novels, over 250 stories, and 2 screenplays, and the editor of 40 anthologies. His work has been translated into 25 languages.

The fate of the world itself hangs in the balance when the Third Reich summons super soldiers from hell to fight on their side. Now it’s up to Albert Einstein to engage his arch-nemesis Heinrich Himmler in a battle of sorcery that may well determine the outcome of World War II. With a little help from America’s greatest warrior — Eleanor Roosevelt.

“Mein Gott, you’re big!” exclaimed Himmler as he looked at the army Satan had supplied.

There were thirteen of them, each blond and blue eyed, each armed with a magical scimitar (which is kind of like a curved lightsaber, but effective rather than pretty), each ten feet tall, each wearing naught but a leather kilt.

“Ow!” cried the nearest as his head bumped against the ceiling, an action and a cry that was repeated twelve more times up and down the line.

“We bow to no one!” thundered one of them. “We’ll raise the ceiling!”

So saying, he lifted his magical scimitar and punched a hole in the ceiling.

Well, he tried to say “There is nothing to it,” but somewhere between “There” and “is” a huge wooden desk fell through the hole and crashed onto his head. He collapsed beneath it, shoved it off to a side, and got groggily to his feet.

“Maybe I should have sacrificed two newts,” muttered Himmler.

P.S. I promise, the next few stories I’ll be unveiling feature absolutely no Nazis whatsoever.

This entry was posted on Thursday, June 21st, 2012 at 8:51 pm and is filed under Publishing. You can follow any responses to this entry through the RSS 2.0 feed. Both comments and pings are currently closed.